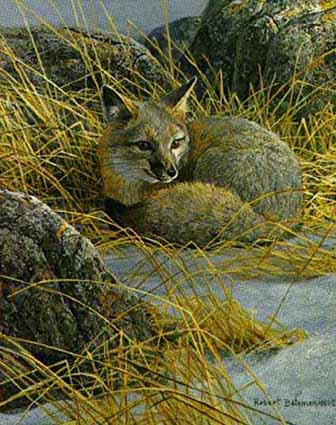 "The plains bison is not the only species that almost disappeared after Europeans arrived on the prairies. Just as integral a member of the mixed grasslands ecosystem was the swift fox, a nocturnal hunter no bigger than a large house cat. Despite its speed - it can run up to 37mph in short bursts - and the fact that its fur was not especially prized, by 1900 only a few isolated populations remained, and by the late 1930s the swift fox had completely disappeared from the Canadian prairies, the northern fringe of its reign. In ensuing years the U.S. population has continued to decline, but the Canadian population has recently begun to make a comeback." - Robert Bateman