"Kestrel and Grasshopper" By Robert Bateman 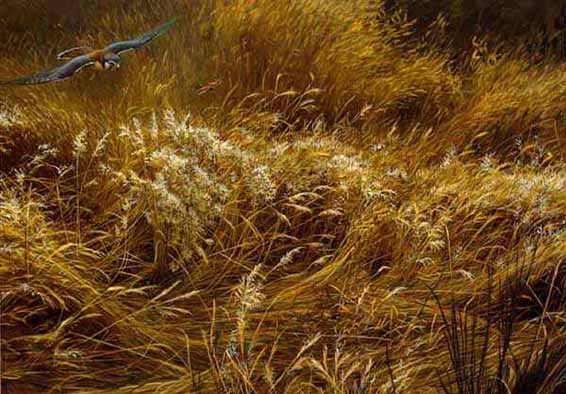 
"One of the most dynamic little predators of North America is the American kestrel. Its dapper plumage makes it even more special. As it is a falcon, the kestrel is trim and streamlined and hunts prey on the wing. Even sitting still, it looks swift and agile.  The vivid harlequin pattern of its face, with the characteristic lustrous eye and teardrop markings of the falcon, almost makes the kestrel look adorable. As prey well knows, however, it is an efficient and ruthless hunter. Late summer is grasshopper season, and the fields are a happy hunting ground. In this painting, I have shown a tousled, almost opulent meadow with several species of grass. The wind has imposed a rhythmic pattern to it, and it seems, like the kestrel, to be in motion while in repose. I have designed the painting to have the kestrel streaking in from the top left in hot pursuit of the grasshopper. The swishy wave action of the grasses carries the motion across the picture, with the dark green in the lower right creating the diagonal tension." - Robert Bateman