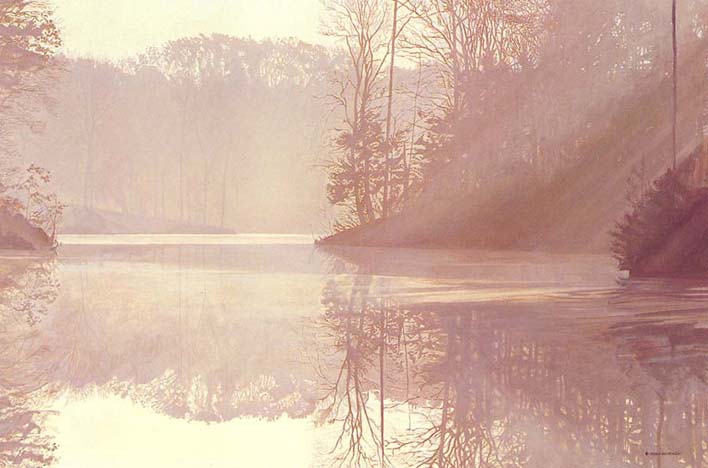 "In my early teens, my brothers and friends occasionally drove from Toronto down to the “deep south” in Canada, looking for birds in the marshes and woodlands of the Lake Erie shore, and usually, I would ride along. There was one place that especially appealed to all of us, its name spoken with some reverence by naturalists: Norfolk County. It is more than a mecca for birders: it is the heart of the Carolinian forest, with its wooded rivers and stream valleys yielding species of the south: magnolia, tulip tree, sassafras, black gum, and flowering dogwood. To me, it was exotic, romantic, and beautiful, and finally, I made it my home.


Just a short distance down the road, over a plank bridge and across my valley, is Deer Creek, most of it a lake, really. On summer weekends, swimmers and anglers splash at the beach and cruise its inlets; but most of the time, it is quiet and alone. On this November morning there wasn't a sound as the mist rose from the water. I watched the calming grey-upon-grey of the nearby shore, the distant hills, above the surface and in its reflections. There were no animals, but when I look at the painting, sometimes I imagine a far-away great blue heron flying into a cove, or a deer, faintly seen, drinking, down at the edge." - Ross Bateman

"From the earliest days my brother Ross has been a kindred spirit. When one is very young, age discrepancy makes a big difference. I became an active naturalist at the age of 12 or 13. Ross was then 6 or 7. He made superhuman efforts to be included in our nature explorations. He did not just tag along. He wanted to be  involved and at the centre of things. He is still that way. As he matured, his sensitivity to the magic of the moment in the natural world became more and more developed. He brings a sensuality to his ability to appreciate subtle moods and qualities of landscape that most people would miss.


His artistic talent was always there. His skill in drawing seems sure and effortless but always captures the essence of his subject. His fresh and sophisticated taste in colour and form is very evident in the eloquent piece “November Morning: Deer Creek”. I have many favourites among his paintings, but I think that this one really brings out the quiet dignity of nature at its best." - Robert Bateman