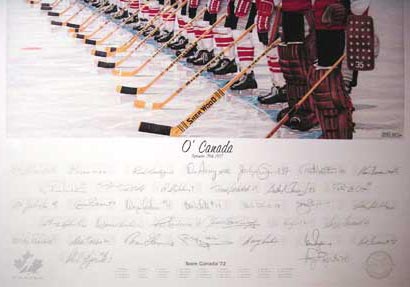 Personally autographed by the 35 members of Team Canada 1972


“I tried to capture... the pride and determination that these great players of Team Canada ‘72 must have felt while standing at the blue line for their country’s national anthem.
In the final game of what is now known as the greatest international hockey series in history, these players were not only playing for themselves, but for an entire nation.
I felt it was very important to capture not only the mood of that particular moment, but also the small details of that time, such as the amount of tape and the curve each player used on their stick or the military police presence in the crowd. The most satisfying part of this project for me, as the artist, was when the actual players and their wives commented on these small details and the fact that they felt their likenesses had been captured within this painting.
I am proud to have been a part of such an important Canadian commemorative, and to have had this incomparable collection of 35 players sign and endorse my work, is truly an honour.” - Daniel Parry